iPhone OS 3, renamed iOS 3 when support for the iPad was added in iOS 3.2, is the third version of the iOS mobile operating system designed by Apple Inc.. iPhone OS 3.0 became available with the iPhone 3GS. It was released on June 17, 2009. It added features such as copy and paste, and MMS. Not all features were available on the original iPhone. Devices running iPhone OS 2.x were upgradeable to this software. The final release supported on the iPhone 2G and iPod Touch is iPhone OS 3.1.3. The iPad was introduced with iOS 3.2. iOS 3.2 was the first version to be called "iOS." iOS 3.2.2 was the final version of iPhone OS 3. More: en.wikipedia.org. 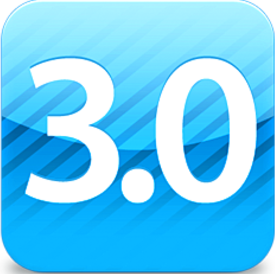