Grindhouse, rating as a movie series

Rodriguez's segment, Planet Terror, revolves around an outfit of rebels attempting to survive an onslaught of zombie-like creatures as they feud with a rogue military unit, while Tarantino's segment, Death Proof, focuses on a misogynistic, psychopathic stuntman who targets young women, murdering them with his "death proof" stunt car. Each feature is preceded by faux trailers of exploitation films in other genres that were developed by other directors. More: en.wikipedia.org. 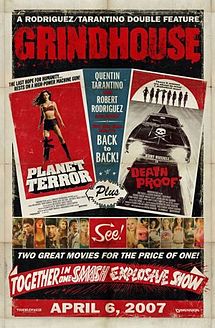