In the series, Voldemort is the archenemy of Harry Potter, who according to a prophecy has "the power to vanquish the Dark Lord". Almost no witch or wizard dares to speak his name, instead referring to him by epithets such as "You-Know-Who", "He-Who-Must-Not-Be-Named" or "the Dark Lord". Voldemort's obsession with blood purity signifies his aim to rid the wizarding world of Muggle (non-magical) heritage and to conquer both worlds, Muggle and wizarding, to achieve pure-blood dominance. Through his mother's family, he is the last descendant of wizard Salazar Slytherin, one of the four founders of Hogwarts School of Witchcraft and Wizardry. He is the leader of the Death Eaters, a group of evil wizards and witches dedicated to ridding the Wizarding World of Muggles and establishing Voldemort as its supreme ruler. More: en.wikipedia.org. 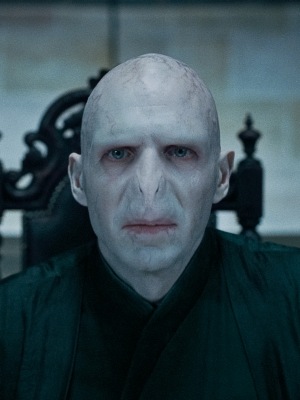 Superman
4
Roomba, C-3PO, or Marvin - Which robot is friendliest to people?