Eren Yeager (エレン・イェーガー Eren Yēgā), spelled Eren Jaeger in the Funimation dub, is a fictional character appearing as the protagonist from the manga series Attack on Titan by Hajime Isayama. Eren is a teenager who swears revenge on enormous creatures known as Titans that devoured his mother. In order to defeat the Titans, Eren, alongside his childhood friends Mikasa Ackerman and Armin Arlert, enlist in the Military and join the Survey Corps—an elite group of soldiers who fight Titans outside the walls.

In the anime adaptation of the series, Eren has been voiced by Yūki Kaji in Japanese and Bryce Papenbrook in English. In the live-action film adaptation, he is portrayed by Haruma Miura. More: en.wikipedia.org. 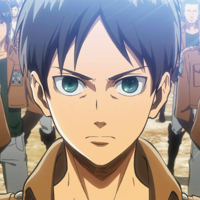