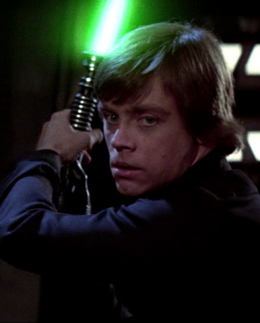 Luke Skywalker is a fictional character appearing as the central protagonist of the original film trilogy and as a minor character in the prequel trilogy of the Star Wars universe created by George Lucas. The character, portrayed by Mark Hamill, is an important figure in the Rebel Alliance's struggle against the Galactic Empire. He is the twin brother of Rebellion leader Princess Leia Organa of Alderaan, a friend of smuggler Han Solo, an apprentice to Jedi Master Obi-Wan "Ben" Kenobi, and the son of fallen Jedi Anakin Skywalker (Darth Vader) and Queen of Naboo/Republic Senator Padmé Amidala.