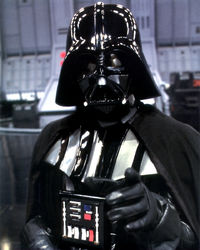 The character was created by George Lucas and has been portrayed by numerous actors. He is an important character in the Star Wars franchise which includes television series, video games, novels, literature and comic books. Originally a Jedi prophesied to bring balance to the Force, he falls to the dark side of the Force and serves the evil Galactic Empire at the right hand of his Sith master, Palpatine (also known as Darth Sidious). He is also the father of Luke Skywalker and Princess Leia Organa.