Ted Cruz as a politician - discussion

Rafael Edward "Ted" Cruz (born December 22, 1970) is the junior United States Senator from Texas. Elected in 2012 as a Republican, he is the first Hispanic or Cuban American to serve as a U.S. Senator from Texas. He is the chairman of the subcommittee on the Oversight, Agency Action, Federal Rights and Federal Courts, U.S. Senate Judiciary Committee. He is also the chairman of the subcommittee on Space, Science, and Competitiveness, U.S. Senate Commerce Committee. More: en.wikipedia.org. 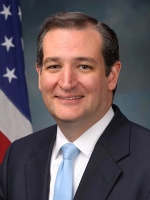 Add your opinion
Status:
Active
Views:
722
subscribe
For new opinion notification
Voting
(6 votes)
Share discussion:
more »
Edit
Flag
Info
Started by Jerry.
At: debate, forum.
See also:
Should Ted Cruz be eligible to run for President?
2
Who should be the Republican candidate for President in 2016?
Donald Trump, Ted Cruz, Marco Rubio, or Ben Carson - Who should be the Republican candidate?