John Kasich as a politician - discussion

John Richard Kasich (born May 13, 1952) is the 69th Governor of Ohio, in office since 2011. A member of the Republican Party, he previously served as a member of the United States House of Representatives, representing Ohio's 12th congressional district from 1983 to 2001. He was a commentator on Fox News Channel, hosting Heartland with John Kasich (2001–2007). He also worked as an investment banker, as managing director of Lehman Brothers' Columbus, Ohio office until the firm collapsed in 2008. More: en.wikipedia.org. 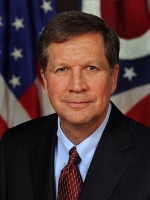