The Santa Clause 3: The Escape Clause, rating as a movie

The film stars Tim Allen returning as Scott Calvin/Santa Claus and Martin Short as Jack Frost. Allen and Short had previously worked together in the 1997 Disney comedy feature film, Jungle 2 Jungle. Eric Lloyd returns in a smaller role as Santa's son Charlie, as do many of the supporting actors from the first two films, reprising their previous roles. However, David Krumholtz, who previously played Bernard the Arch-elf, does not appear in this one because of starring on Numbers, and so Curtis (played by Spencer Breslin), who was previously the Assistant Head Elf, has now been promoted to Bernard's former position. Like the previous film, this film was shot in the Canadian cities of Vancouver and Calgary. This was Peter Boyle's final film to be released before he died from cancer one month after its release (The 2008 film All Roads Lead Home would be released posthumously.). 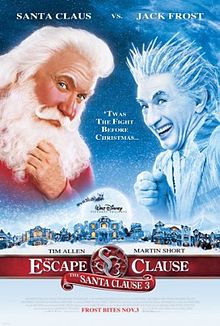