Brigitte Bardot, rating as an activist

Brigitte Anne-Marie Bardot (born 28 September 1934) is a French former actress, singer and fashion model, who later became an animal rights activist. Starting in 1969, Bardot became the official face of Marianne (who had previously been anonymous) to represent the liberty of France.

Bardot was an aspiring ballerina in early life. She started her acting career in 1952 and after appearing in 16 routine comedy films, with limited international release, became world-famous in 1957, with the controversial film And God Created Woman. She later starred in Jean-Luc Godard's 1963 film Le Mépris. For her role in Louis Malle's 1965 film Viva Maria! Bardot was nominated for a BAFTA Award for Best Foreign Actress. Bardot caught the attention of French intellectuals. She was the subject of Simone de Beauvoir's 1959 essay, The Lolita Syndrome, which described Bardot as a "locomotive of women's history" and built upon existentialist themes to declare her the first and most liberated woman of post-war France.

Bardot retired from the entertainment industry in 1973. During her career in show business, she starred in 47 films, performed in several musical shows and recorded over 60 songs. She was awarded the Legion of Honour in 1985 but refused to receive it. After her retirement, she established herself as an animal rights activist. During the 1990s, she generated controversy by criticizing immigration and Islam in France and has been fined five times for inciting racial hatred. More: en.wikipedia.org. 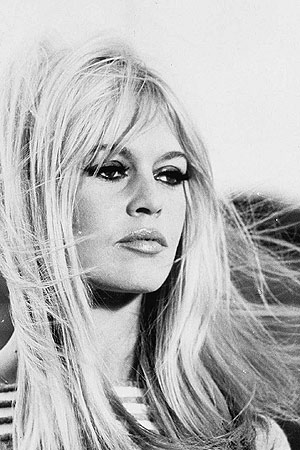