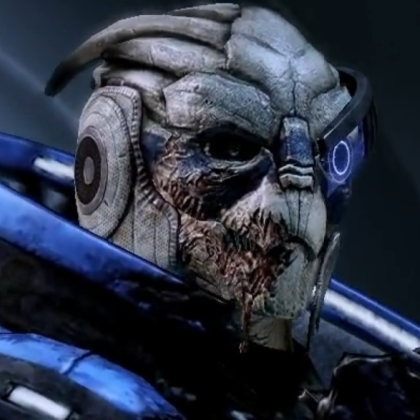 Garrus Vakarian is a fictional character in BioWare's Mass Effect franchise, who acts as a party member (or "squadmate") in each of the first three games of the series, Mass Effect, Mass Effect 2 and Mass Effect 3. Garrus is a turian, one of the various alien species in Mass Effect, and is voiced by Brandon Keener.

The character is initially introduced in the first game as a C-Sec officer tired of all the rules and regulations his job includes. Come Mass Effect 2, Garrus forms a vigilante group on the crime-ridden Omega, before his team is wiped out due to betrayal. Mass Effect 3 features him advising the other turians on how to defeat the Reapers. In addition to the Mass Effect game trilogy, Garrus also appears in the third issue of Homeworlds; it tells the story of how Garrus ends up on Omega and elaborates on his backstory.

Garrus's design was altered throughout the series, though his blue-and-black colour scheme and visor were maintained in all his appearances. Developers were initially worried that Garrus, as well as the rest of the alien squadmates, would not prove emotionally compelling, but were surprised by positive fan feedback and added him as a romance option in the second game due to it. Since his appearance in Mass Effect, Garrus has received a positive reception. Various merchandise has been made around Garrus, including action figures, a T-shirt and a bust.