The Edge as a songwriter - discussion

David Howell Evans (born 8 August 1961), better known by his stage name The Edge (or just Edge), is a British-born Irish musician and songwriter best known as the lead guitarist, keyboardist and backing vocalist of the rock band U2. A member of the group since its inception, he has recorded 13 studio albums with the band as well as one solo record. As a guitarist, the Edge has crafted a minimalistic and textural style of playing. His use of a rhythmic delay effect yields a distinctive ambient, chiming sound that has become a signature of U2's music.

The Edge was born in London, England to a Welsh family, and was raised in Ireland after moving there as an infant. In 1976, at Mount Temple Comprehensive School, he formed U2 with his fellow students and his older brother Dik. Inspired by the ethos of punk rock and its basic arrangements, the group began to write its own material. They eventually became one of the most popular acts in popular music, with successful albums such as 1987's The Joshua Tree and 1991's Achtung Baby.

As a member of U2 and as an individual, the Edge has campaigned for human rights and philanthropic causes. He co-founded Music Rising, a charity to support musicians affected by Hurricane Katrina. He has collaborated with U2 bandmate Bono on several projects, including songs for Roy Orbison and Tina Turner, and the soundtracks to the musical Spider-Man: Turn Off the Dark and the Royal Shakespeare Company's London stage adaptation of A Clockwork Orange. More: en.wikipedia.org. 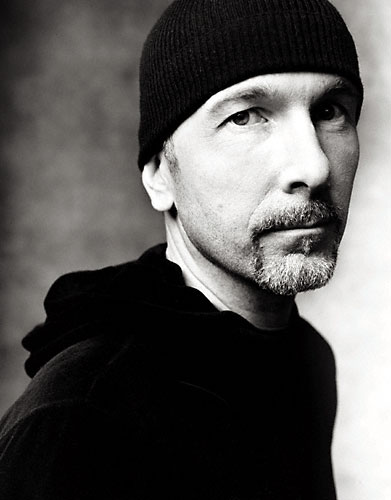