The Hitchhiker's Guide to the Galaxy as a movie - discussion

The Hitchhiker's Guide to the Galaxy (film)

The Hitchhiker's Guide to the Galaxy is a 2005 comic science fiction film directed by Garth Jennings, based upon previous works in the media franchise of the same name, created by Douglas Adams. It stars Martin Freeman, Sam Rockwell, Mos Def, Zooey Deschanel and the voices of Stephen Fry (the guide book) and Alan Rickman (Marvin, the Paranoid Android). Shooting was completed in August 2004 and the movie was released on 28 April 2005 in Europe, Australia and New Zealand, and on the following day in Canada and the United States. The pre-title sequence of the film was shot in Loro Parque, Puerto de la Cruz, Tenerife.

Adams, who co-wrote the film's screenplay, died in 2001, before production began; the film is dedicated to him. More: en.wikipedia.org. 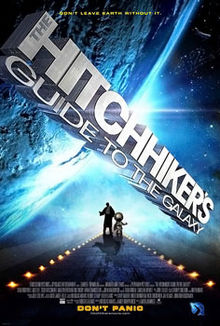 Prometheus
The Martian vs. Interstellar vs. Gravity - which movie is best?