Thomas Mulcair as a politician - discussion

Thomas Joseph "Tom" Mulcair (born October 24, 1954) is a Canadian politician and the leader of the New Democratic Party of Canada. A Member of Parliament for the electoral district of Outremont in Quebec since 2007, he was selected as the leader of the NDP at a leadership election on March 24, 2012, on the fourth ballot.

A lawyer by profession, Mulcair joined the federal NDP in 1974. He was the provincial Member of the National Assembly of Quebec for the riding of Chomedey in Laval from 1994 to 2007, holding the seat for the Liberal Party of Quebec. He served as the Minister of Sustainable Development, Environment and Parks from 2003 until 2006, in the Liberal government of Premier Jean Charest. Elected MP for Outremont in a by-election in 2007, he was named co-Deputy Leader of the NDP shortly afterwards, and has won re-election to his seat, three times.

On May 26, 2011, he was named the New Democratic Party's Opposition House Leader and also served as the NDP's Quebec lieutenant, a post he held until named party leader. Prior to entering politics, Mulcair was a senior civil servant in the Quebec provincial government, ran a private law practice, and taught law at university level. More: en.wikipedia.org. 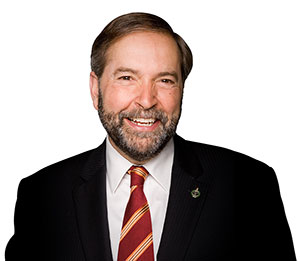 Ben Carson
Hillary Clinton or Bernie Sanders - Who should be the Democratic candidate?