Semax as a medication for depression - discussion

Semax (Russian: Семакс) is a drug produced and prescribed mostly in Russia and Ukraine for a broad range of conditions but predominantly for its purported nootropic, neuroprotective, and neurogenic/neurorestorative properties. It is a heptapeptide, synthetic analog of a fragment of adrenocorticotropic hormone (ACTH), ACTH (4-10), of the following structure: Met-Glu-His-Phe-Pro-Gly-Pro. Semax has not been evaluated by the U.S. FDA. It is legal to import by private citizens for personal use.

Semax has undergone extensive study in Russia and is on the Russian List of Vital & Essential Drugs approved by the Russian Federation government on December 7, 2011. Medical uses for Semax include treatment of stroke, transient ischemic attack, memory and cognitive disorders, peptic ulcers, optic nerve disease, and to boost the immune system. More: en.wikipedia.org. 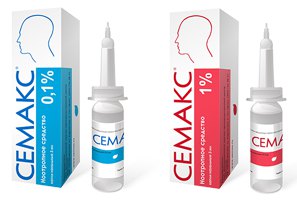 Fluvoxamine
Is Brintellix a revolutionary drug for depression?

Vilazodone
1
Men's Health
1
Should depression be classified as a biochemical illness?