Black Hawk Down (soundtrack) as a film soundtrack - discussion

Black Hawk Down is the soundtrack accompanying the 2001 film of the same name. The original score was composed by Hans Zimmer. The music was written with several other musicians (Martin Tillmann, Craig Eastman, Heitor Pereira, Mel Wesson...) in what they called "The War Room" in the Media Ventures studios. Based on jamming sessions that were later edited to match the pictures, the score was produced within a few weeks. The score being very experimental, Hans Zimmer was afraid there would not be much music suitable for a listening experience on compact disc. The soundtrack disc was released on January 15, 2002. More: en.wikipedia.org. 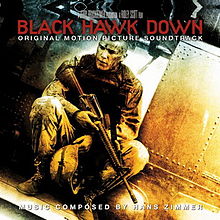 Pirates of the Caribbean: At World's End (soundtrack)

Pirates of the Caribbean: The Curse of the Black Pearl (soundtrack)

The Good, the Bad and the Ugly (soundtrack)

Pirates of the Caribbean: On Stranger Tides (soundtrack)