The iPad Pro 9.7" is a tablet computer designed, developed, and marketed by Apple Inc. It is available in 2 screen sizes,12.9 inch and 9.7 inch, each with three options for internal storage capacities: 32, 128 or 256 GB, whilst, the 256 GB configuration marking the iPad Pro the first iOS device to be configurable to that storage size.

The first, 12.9 inch version of the iPad Pro was announced on September 9, 2015 and released on November 11, 2015. It is larger than all previous iPad models and the first iPad tablet to feature LPDDR4 RAM. This was followed by the 9.7 inch version of the iPad Pro, which was announced on March 21, 2016 and began shipping on March 31, 2016. Compared to the iPad Air 2, it features a faster CPU, a better camera, and it is the first iPad to feature True Tone Flash and Retina Flash. It also brings in a new 256GB storage option and a True Tone display, which allows the LCD to adapt to ambient lighting to change its color and intensity in order to offer a more pleasant and natural experience. More: en.wikipedia.org. 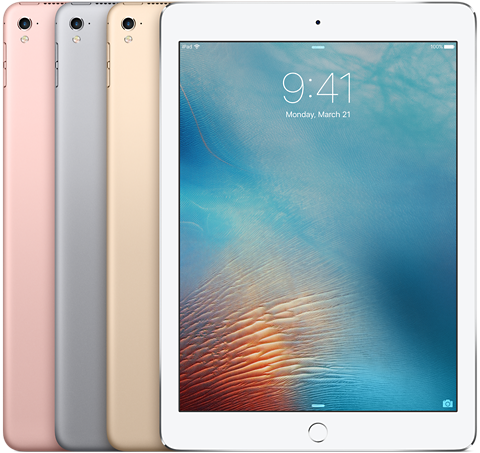