Scary Movie 4, rating as a movie

Scary Movie 4 is a 2006 American horror comedy parody film and the fourth film of the Scary Movie franchise, as well as the first film in the franchise to be released under The Weinstein Company banner since the purchase of Dimension Films. It was directed by David Zucker, written by Jim Abrahams, Craig Mazin and Pat Proft, and produced by Robert K. Weiss and Craig Mazin. The film marks the final Scary Movie appearances of the main stars, Anna Faris and Regina Hall (who portray Cindy and Brenda, respectively), and concludes the original story arc. This was initially intended to be the final film in the Scary Movie franchise, but Scary Movie 5 was released by The Weinstein Company on April 12, 2013, in a different storyline, with Simon Rex, Charlie Sheen, & Molly Shannon in different roles. More: en.wikipedia.org. 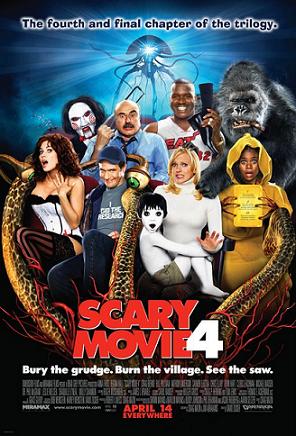