The Good, the Bad and the Ugly, rating as a movie

The Good, the Bad and the Ugly (Italian title: Il buono, il brutto, il cattivo, lit. "The Good, the Ugly, the Bad") is a 1966 Italian epic Spaghetti Western film directed by Sergio Leone, starring Clint Eastwood, Lee Van Cleef, and Eli Wallach in the title roles respectively. The screenplay was written by Age & Scarpelli, Luciano Vincenzoni, and Leone (with additional screenplay material provided by an uncredited Sergio Donati), based on a story by Vincenzoni and Leone. Director of photography Tonino Delli Colli was responsible for the film's sweeping widescreen cinematography and Ennio Morricone composed the film's score, including its main theme. It was a co-production between companies in Italy, Spain, West Germany, and the United States. More: en.wikipedia.org. 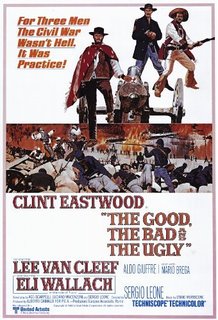