Sicario, rating as a movie

Sicario is a 2015 American action crime thriller film directed by Denis Villeneuve and starring Emily Blunt, Benicio del Toro, and Josh Brolin. Written by Taylor Sheridan, the film is about a principled FBI agent who is enlisted by a government task force to bring down the leader of a powerful and brutal Mexican drug cartel. Sicario was selected to compete for the Palme d'Or at the 2015 Cannes Film Festival. Distributed by Lionsgate, the film began a limited release in the United States on September 18, 2015, prior to a nationwide release on October 2, 2015. 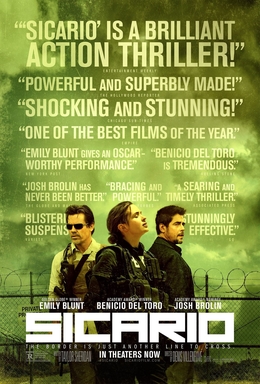