Matsuo Bashō, rating as a poet

Matsuo Bashō (松尾 芭蕉, 1644 – 1694), born 松尾 金作, then Matsuo Chūemon Munefusa (松尾 忠右衛門 宗房), was a poet of the Edo period in Japan. Many of his poems are reproduced on monuments and traditional sites.

Bashō was introduced to poetry young, and after integrating himself into the intellectual scene of Edo (modern Tokyo) he quickly became well known throughout Japan. He made a living as a teacher; but then renounced the social, urban life of the literary circles and was inclined to wander throughout the country, heading west, east, and far into the northern wilderness to gain inspiration for his writing. His poems were influenced by his firsthand experience of the world around him, often encapsulating the feeling of a scene in a few simple elements. More: en.wikipedia.org. 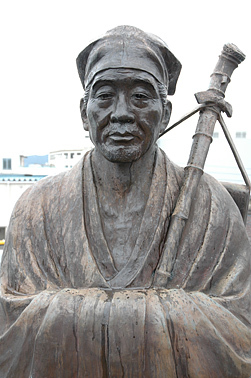