Orphans: Brawlers, Bawlers & Bastards is a limited edition three CD set by Tom Waits, released by the ANTI- label on November 17, 2006 in Europe and on November 21, 2006 in the United States.

The album is divided into three sections, with each disc being a separate collection in its own. It borrows from Tom Waits’ typical rock sound, with the first disc being blues and rock-based, the second centred on slow-tempo, melancholic ballads, and the third on more experimental compositions. Additionally, the record contains influences of other genres, including folk, gospel, jazz and roots music. It was nominated for a Grammy Award for Best Contemporary Folk Album. Furthermore, it was a fair commercial success, charting in the United States Billboard 200, as well as in Australia, Switzerland and Austria, reaching the top twenty in the latter.

The Orphans Tour was conducted in support of the album prior to its release. More: en.wikipedia.org. 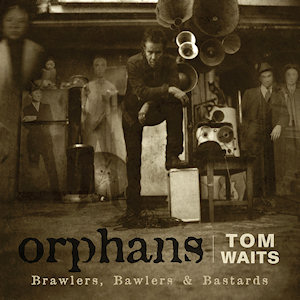 Kings & Queens of the Underground