Time Machine is the fifth studio album by guitarist Joe Satriani, released on October 13, 1993 through Relativity Records and reissued in 1998 through Epic Records. It is a double-disc compilation: the first disc contains a selection of new tracks, outtakes and unreleased studio recordings, while the second disc is composed of live recordings from 1988 and 1992.

The album reached No. 95 on the U.S. Billboard 200 and remained on that chart for eight weeks, as well as reaching No. 72 in the Netherlands and No. 87 in Germany. "All Alone" was released as a single, reaching No. 21 on Billboard's Mainstream Rock chart and receiving a nomination for Best Rock Instrumental Performance at the 1995 Grammy Awards, along with "Speed of Light" at the 1994 Grammys; these being Satriani's fifth and sixth such nominations. Time Machine was certified Gold on October 27, 1994. More: en.wikipedia.org. 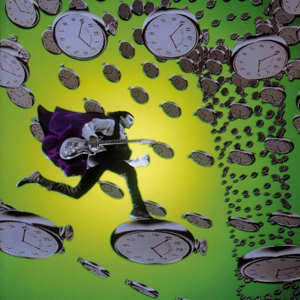 Flying in a Blue Dream