Surfing with the Alien, rating as a music album

Surfing with the Alien is the second studio album by American rock guitarist Joe Satriani. It was released on October 15, 1987, by Relativity Records. The album is one of Satriani's most successful to date.

The album contains fast and complex songs such as the title track and "Satch Boogie", which helped to further popularize shred guitar during that time, in addition to the strange-sounding "Crushing Day" and "Lords of Karma". By contrast slower, melodic songs such as "Always with Me, Always with You" and "Echo" provide a change of pace. "Midnight" utilizes the technique of two-handed tapping at high tempo, evoking a Spanish fingerstyle effect. There are also Nashville-tuned guitars ("Echo") and key changes ("Always with Me, Always with You" and "Echo") for variation. "Ice 9" references the fictional apocalyptic substance from Kurt Vonnegut's 1963 novel Cat's Cradle. More: en.wikipedia.org. 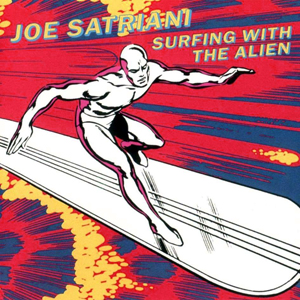