Attack on Titan, rating as a comic book series

Attack on Titan (Japanese: 進撃の巨人 Shingeki no Kyojin, lit. "Advancing Giants") is a Japanese manga series written and illustrated by Hajime Isayama. It is set in a world where humanity lives inside cities surrounded by enormous walls; a defense against the Titans, gigantic humanoids that eat humans seemingly without reason. The story initially centers on Eren Yeager, his adopted sister Mikasa Ackerman and childhood friend Armin Arlert, who joins the military to fight the Titans after their home town is invaded and Eren's mother is eaten. However, as the story progresses and the truths about the Titans are slowly revealed to the reader, the narrative shifts to encompass Historia Reiss, squad leader Levi, and other supporting characters. 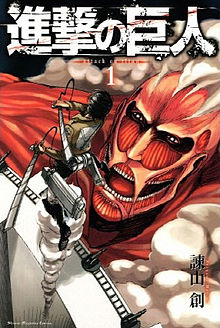 Rurouni Kenshin
7
Should there be a sequel to Death Note?
10
Who was the smartest Death Note character?