His first leading role came in Raoul Walsh's lavish widescreen epic The Big Trail (1930), which led to leading roles in numerous B movies throughout the 1930s, many of them in the Western genre.

Wayne's career took off in 1939, with John Ford's Stagecoach making him an instant mainstream star. Wayne went on to star in 142 pictures.

In addition to True Grit and Stagecoach, among his best-known Westerns are Red River (1948), as a cattleman driving his herd north on the Chisholm Trail, The Searchers (1956), playing a Civil War veteran whose young niece is abducted by a tribe of Comanches, and The Man Who Shot Liberty Valance (1962), as a troubled rancher competing with an Eastern lawyer for a woman's hand in marriage. Wayne is also remembered for his roles in The Quiet Man (1952), Rio Bravo (1959), and The Longest Day (1962). In his final screen performance, he starred as an aging gunfighter battling cancer in The Shootist (1976). He appeared with many important Hollywood stars of his era, including Maureen O'Hara, James Stewart, Dean Martin, and Natalie Wood. More: en.wikipedia.org. 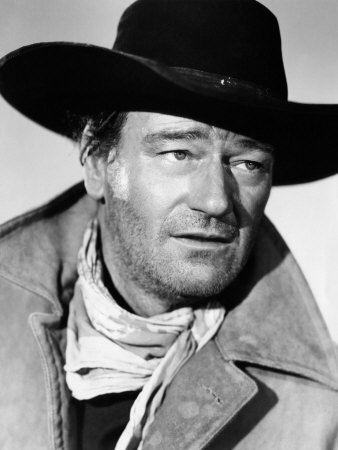