Powaqqatsi, rating as a movie

Powaqqatsi, or Powaqqatsi: Life in Transformation, is a 1988 American documentary film directed by Godfrey Reggio and the sequel to Reggio's experimental 1982 film, Koyaanisqatsi. It is the second film in the Qatsi trilogy.

Powaqqatsi is a Hopi word meaning "parasitic way of life" or "life in transition". While Koyaanisqatsi focused on modern life in industrial countries, Powaqqatsi, which similarly has no dialogue, focuses more on the conflict in third world countries between traditional ways of life and the new ways of life introduced with industrialization. As with Koyaanisqatsi and the third and final part of the 'Qatsi' trilogy, Naqoyqatsi, the film is strongly related to its soundtrack, written by Philip Glass. More: en.wikipedia.org. 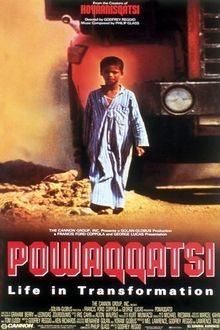