Django Unchained, rating as a movie

Django Unchained is a 2012 American black comedy western film written and directed by Quentin Tarantino, starring Jamie Foxx, Christoph Waltz, Leonardo DiCaprio, Kerry Washington, and Samuel L. Jackson. Set in the Old West and antebellum South, it is a highly stylized variation of spaghetti Westerns, and a tribute to the 1966 Italian film Django by Sergio Corbucci, whose star Franco Nero has a cameo appearance.

The story is set the Deep South in the early winter of 1858 and the following spring of 1859, two years before the outbreak of the American Civil War, with preliminary scenes taking place in Old West Texas. The film follows Django (Foxx), a branded black slave, and Dr. King Schultz (Waltz), an English-speaking German bounty hunter posing as a travelling dentist. Schultz buys and then promises to free Django in exchange for his help in collecting a large bounty on three outlaws. Schultz subsequently promises to train Django in bounty hunting and split the bounties with him in partnership, if Django assists him in hunting down other outlaws throughout the winter. He further offers to help Django to locate and free his long-lost wife Broomhilda (Washington) from her cruel plantation owner Calvin Candie (DiCaprio). More: en.wikipedia.org. 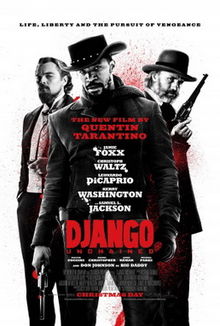