Full Metal Jacket is a 1987 British-American war film directed and produced by Stanley Kubrick. The screenplay by Kubrick, Michael Herr, and Gustav Hasford was based on Hasford's novel The Short-Timers (1979). The film stars Matthew Modine, Adam Baldwin, Vincent D'Onofrio, R. Lee Ermey, Dorian Harewood, Arliss Howard, Kevyn Major Howard, and Ed O'Ross, and its storyline follows a platoon of U.S. Marines through their training and the experiences of two of the platoon's Marines in the Tet Offensive during the Vietnam War. The film's title refers to the full metal jacket bullet used by infantry riflemen. The film was released in the United States on June 26, 1987. 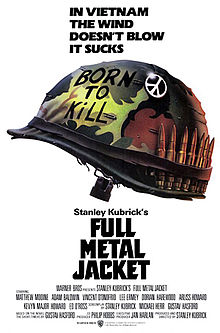