Reservoir Dogs, rating as a movie

Reservoir Dogs is a 1992 American neo-noir black comedy crime thriller that depicts the events before and after a botched diamond heist. The film was the debut of director and writer Quentin Tarantino, and stars Harvey Keitel, Tim Roth, Steve Buscemi, Chris Penn, Lawrence Tierney, and Michael Madsen. Tarantino and criminal-turned-author Edward Bunker have minor roles. It incorporates many themes that have become Tarantino's hallmarks—violent crime, pop culture references, profanity, and nonlinear storytelling.

Although it was not given much promotion upon release, the film became a modest success in the United States after grossing $2,832,029, recouping its $1.2 million budget. The film was more successful in the United Kingdom, grossing nearly £6.5 million, and it achieved higher popularity after the success of Tarantino's next film, Pulp Fiction (1994). A soundtrack was released featuring songs used in the film, which are mostly from the 1970s. More: en.wikipedia.org. 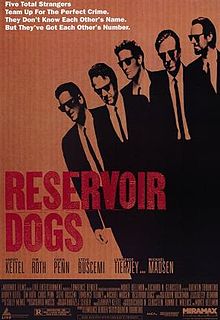