Viva la Vida or Death and All His Friends, rating as a music album

Viva la Vida or Death and All His Friends (Coldpla...

Viva la Vida or Death and All His Friends, often referred to as simply Viva la Vida, is the fourth studio album by British alternative rock band Coldplay, released on 12 June 2008 on Parlophone. The album was named after a Spanish phrase that translates in English as "Live the life", although it can also be taken as "Long live life". Lyrically, the album contains references to love, life, death, and war.

Recording sessions for the album took place during June 2007 to April 2008 and featured production by Jon Hopkins, Rik Simpson, Markus Dravs, and Brian Eno. The album was their first to be produced by Eno. The band forced themselves to explore experimental styles, as Eno required every song on the album to sound different, and expanded their musical interests while recording Viva la Vida. The band wanted to make the album shorter than 42 minutes. Despite this, the album is longer than the length they intended. Development of the album delayed the release date several times. The album cover of Viva la Vida is the painting Liberty Leading the People by Eugène Delacroix. More: en.wikipedia.org. 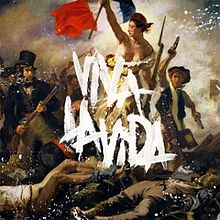