A Hard Day's Night, rating as a music album

A Hard Day's Night is the third studio album by English rock band the Beatles, released on 10 July 1964, with side one containing songs from the soundtrack to their film A Hard Day's Night. The American version of the album was released two weeks earlier, on 26 June 1964 by United Artists Records, with a different track listing. This is the first Beatles album to be recorded entirely on four-track tape, allowing for good stereo mixes with the vocals in the centre.

In contrast to their first two albums, all 13 tracks on A Hard Day's Night were written by John Lennon and Paul McCartney. The album contains some of their most famous songs, including the title track and the previously-released "Can't Buy Me Love"; both were transatlantic number-one singles for the band. More: en.wikipedia.org. 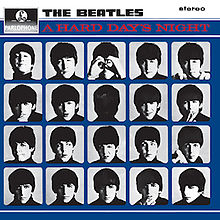