Dr. Seuss' How the Grinch Stole Christmas, rating as a movie

Dr. Seuss' How the Grinch Stole Christmas (promoted theatrically as The Grinch) is a 2000 American family comedy Christmas film from Universal Pictures and Imagine Entertainment, based on the 1957 story of the same name by Dr. Seuss. It was the first Dr. Seuss book to be adapted into a full-length feature film. Because the film is based on a children's picture book, many additions had to be made to the storyline to bring it up to feature-length, including some information about the backstory of the titular character. Most of the rhymes used in the book were used in the film, though some were slightly changed, and new rhymes were put in as well. The film was directed by Ron Howard, produced by Howard and Brian Grazer, and starring Jim Carrey, Jeffrey Tambor, Christine Baranski, Bill Irwin, Molly Shannon and introducing Taylor Momsen as Cindy Lou Who.

The film spent four weeks as the number-one film in the United States. The Grinch is the highest-grossing holiday film of all time with $345,141,403 worldwide. It won the Academy Award for Best Makeup, and was also nominated for Best Art Direction and Best Costume Design. More: en.wikipedia.org. 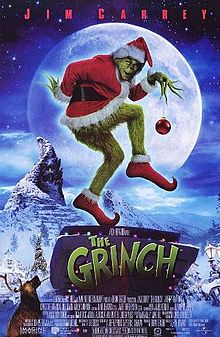