Home Alone 2: Lost in New York, rating as a movie

Home Alone 2: Lost in New York is a 1992 American Christmas comedy film written and produced by John Hughes and directed by Chris Columbus. It is the second film in the Home Alone series and the sequel to Home Alone. Macaulay Culkin reprises his role as Kevin McCallister, while Joe Pesci and Daniel Stern reprise their roles as the Wet Bandits, now known as the Sticky Bandits. Catherine O'Hara, John Heard, Tim Curry, and Brenda Fricker are also featured.

The film was shot in Winnetka, Illinois, O'Hare International Airport in Chicago, Miami, and New York City (which was star Culkin's hometown at the time). The exterior of Duncan's Toy Chest in New York City was filmed outside of the Rookery Building in downtown Chicago. The film became the second most financially successful film of 1992, earning over $173 million in revenue in the United States and $358 million worldwide against a budget of $20 million. 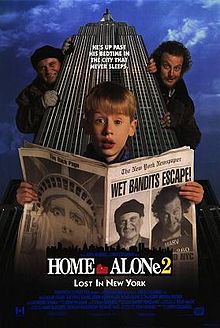