The Land Before Time, rating as a movie

The Land Before Time is a 1988 American-Irish animated adventure drama film directed and co-produced by Don Bluth and executive produced by Steven Spielberg, George Lucas, Kathleen Kennedy, and Frank Marshall.

Produced by Sullivan Bluth Studios and Spielberg's Amblin Entertainment, it features dinosaurs living in the prehistoric times. The plot concerns a young Brontosaurus named Littlefoot who is orphaned when his mother is killed by a Tyrannosaurus. Littlefoot flees famine and upheaval to search for the Great Valley, an area spared from devastation. On his journey, he meets four young companions: Cera, a Triceratops; Ducky, a Saurolophus; Petrie, a Pteranodon; and Spike, a Stegosaurus.

The film explores issues of prejudice between the different species and the hardships they endure in their journey as they are guided by the spirit of Littlefoot's mother and also forced to deal with the murderous Tyrannosaurus that killed her. This is the only Don Bluth film of the 1980s in which Dom DeLuise did not participate (instead, he starred in Disney's Oliver & Company that same year), and the only film in The Land Before Time series that is not a musical, as well as the only one to be released theatrically worldwide. More: en.wikipedia.org. 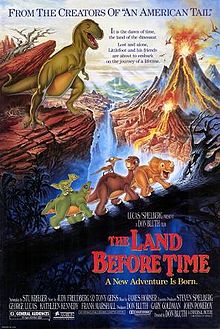