Dune, rating as a novel

Set in the distant future amidst a feudal interstellar society in which noble houses, in control of individual planets, owe allegiance to the Padishah Emperor, Dune tells the story of young Paul Atreides, whose noble family accepts the stewardship of the desert planet Arrakis. As this planet is the only source of the "spice" melange, the most important and valuable substance in the universe, control of Arrakis is a coveted — and dangerous — undertaking. The story explores the multi-layered interactions of politics, religion, ecology, technology, and human emotion, as the forces of the empire confront each other in a struggle for the control of Arrakis and its "spice".

Herbert wrote five sequels: Dune Messiah, Children of Dune, God Emperor of Dune, Heretics of Dune, and Chapterhouse: Dune. The first novel also inspired a 1984 film adaptation by David Lynch, the 2000 Sci-Fi Channel miniseries Frank Herbert's Dune and its 2003 sequel Frank Herbert's Children of Dune (which combines the events of Dune Messiah and Children of Dune), computer games, at least two board games, songs, and a series of followups, including prequels and sequels, that were co-written by Kevin J. Anderson and the author's son, Brian Herbert, starting in 1999.

Since 2009, the names of planets from the Dune novels have been adopted for the real-world nomenclature of plains and other features on Saturn's moon Titan. More: en.wikipedia.org. 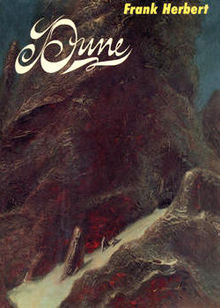