Should public school students be required to stand, salute, and cite the Pledge of Allegiance?

"I pledge allegiance to the Flag of the United States of America, and to the Republic for which it stands, one Nation under God, indivisible, with liberty and justice for all." More: en.wikipedia.org. 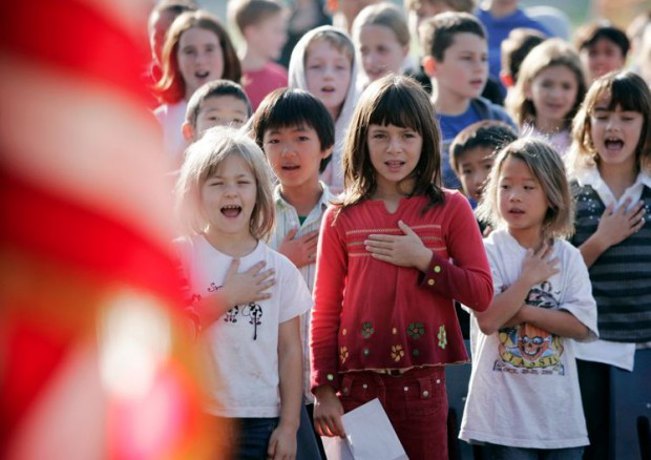 Options to choose:
Yes
No, they may remain seated and silent
No, but if they do not, they should exit the classroom temporarily
Vote!
See the discussion.
4 opinions, 5 talks
See also:
12
Should education be compulsory?
31
Should it be required to label GMO foods?
30
Should health insurance be mandatory?
88
Should any vaccinations be mandatory?
88
Should a man be obligated to pay child support if he doesn't want the child?
45
Should maternity leave be mandatorily paid?
48
Should motorcycle helmets be mandatory?
65
Should voting in elections be mandatory?
44
Should it be mandatory to use seat belts in a car?
131
Should citizens be allowed to legally own guns?
Pie graph
437
views
Filter votes:
-
-
anim graphs
Loading...
Scale:
Topic's discussion: 4 opinions, 5 talks
Show table
Embed graph
More info
+1
-0
Interesting
Add your opinion:
Improve:
Edit
Flag
Started by unpopular speech.
Voting years: 2015 (Nov), 2016, 2017, 2018, 2019, 2020.
At: pledge of allegiance, should children cite pledge of allegiance, should student cite pledge of allegiance, poll, statistics, graph.
Share this voting via OpiWiki smartlink:
OR