It's disrespectful to Donald Trump, but not to Democracy. Everyone has the right to express their opinion. I think it's a dumb opinion, though. If people were denied the right to vote, they should most certainly protest. But if you voted in the election, or you sat on your couch because you thought everyone else would vote your candidate in, you've got nothing to protest. If the reverse had happened and Hillary had won the electoral vote and "The Donald" had won the popular vote, Democrats would be saying they won fair and square, and Trump would be talking about what a corrupt system the electoral college is, etc., etc. 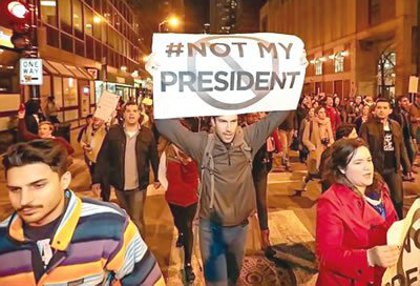 Do you support the Occupy movement?
8
Would you like the voting system for U.S. presidential election to be changed?
What do you believe the outcome of the next presidential election will be?
2
Does Donald Trump have a chance at the presidency?
23
Why people elected Barack Obama as President (twice)?

Is Jeremy Corbyn being treated fairly?
1
Which is better for the country: democracy or monarchy with a wise and moral monarch?