Drunken Master II as a movie

What made Jackie Chan a star, besides his obvious physical skills, is how he interacts with his environment during fight scenes. Give him any kind of object and he'll turn it into a weapon. In this movie, he not only uses objects, he uses his own body as a prop. Chan, as usual, uses his imagination and carves many memorable scenes thanks to the drunken kung fu fighting style which offered an almost limitless amount of highly original stunts.

Jackie was at, perhaps, 85-90% of his prime back when this movie was shot. It's one of his last great movies as a martial artist. In the late 90's, he, understandably so, had to resort to special effects and had to reduce the risks of certain stunts. At some point, the injuries and age had to catch up. One of the reasons why I believe Drunken Master II is one of, if not the best Jackie Chan movie, is the fact that not only was he still healthy enough to come up with superb physical prowesses, but he had the experience, money and the manpower, some key elements that lacked in his earlier films.

And let's talk about the extras. This movie has a ridiculous amount of people. In the first 5 minutes, you'll know what I'm talking about as you'll see a whole bunch of guys entering a train (besides the usual "buy a ticket, go through the door" way). There's tens and tens, if not a couple hundred people throughout the movie, and a big number of them actually are more than extras; they are accomplished stuntmen. The Axe Gang battle has bodies jumping and running around all over the place. It's pure insanity and it's so much fun.

The final battle scene is something. Ken Lo and Jackie Chan. It's one of my faves. The intensity of the scene makes you reconsider the validity of special effects in today's movies. The two men are so into it, you almost wonder if they were actually fighting for real. The hits and subsequent pain do seem very real, after all. Ken Lo appears to be almost invincible, and it's not just the movie that makes you feel that way. The guy is just so athletic. He is as fast as lightning. Keep in mind Ken Lo was Jackie Chan's bodyguard - that's how badass Ken Lo is. Because, honestly, who could be a better bodyguard for Jackie Chan besides Jackie Chan himself?

The movie, like most action flicks, suffers from a relatively feeble scenario. The story is simple, if not childish. But it never tries to make you think otherwise. The many comical scenes and overacting (Anita Mui) prove my point. You can sense that, despite the harsh battle scenes, every single actor is having fun. And it's contagious. 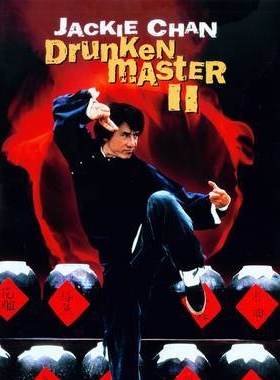