Bernie Sanders as a politician

I was raised by conservatives, later drifted to libertarian views in my adolescence. 2016 is the first election I can vote in and I was originally planning on voting for Rand Paul, but now I'm leaning towards Bernie because I feel like he could implicate a socialist system in America and actually make it work unlike Obama or Hillary. Bernie wants a truly free America, where everyone is treated the same, and no one gets special privileges. A government that doesn't intrude on its people unlike the government that most of the Republicans want to keep. People would be able to actually smoke a joint and not rot in prison. Electing Bernie would be an awesome "fuck you" to the corporations and billionaires like the Koch brothers. Bernie Sanders has my first vote and my support. 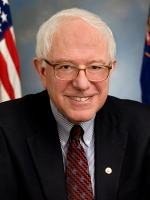 Opinion's page
Click the @ to see full topic's discussion.
Status:
Active
Replies:
Be first to reply!
subscribe
For new reply notification
Voting
(45 votes)
Share opinion's discussion:
more »
See also:
S.1981 - Equal Employment for All Act of 2015
Who was most "presidential" in the Oct 13 2015 Democratic debate?
Hillary Clinton or Bernie Sanders - Who should be the Democratic candidate?
1
Who won the Oct 13 2015 Democratic debate?
What are pros and cons of Bernie Sanders becoming president?
12
Who should be the Democratic candidate? (H. Clinton, M. O'Malley, B. Sanders)
Bernie Sanders or Donald Trump - who would you vote for?
1
Will Bernie Sanders' plan work if he becomes President?