Arnold Schwarzenegger as an action actor

Arnold is the Captain of my child hood Hero team without a doubt. My favorite movie of his besides the Terminator series and Conan is Predator for sure. The only time I was ever really afraid the he might die and fail to complete his mission to "KICK ASS" was at the end of that film where he had to take on an opponent that was physically superior to him, but Arnold achieves what he sets his mind to be it playing a role in a fictional film OR in real life. He not only realizes every goal he sets for himself, He inspires and encourages others to do so as well. If that's not the personification of a HERO I don't what is.

He played in some of my all time fave movies... Terminator (I & II), Predator, Conan, Total Recall, Commando... Sure, he's not ur typical "actor's studio" guy but hell yeah! no one can deny that his impact on action cinema is definitive. Dunnow what to think about his political career except that imo he wasted some of his time and energy in that snakes nest world... He should have made "King Conan" instead ;)

I don't know Rob, Arnold speaks worst English than me..., but I do admit he was really good in Terminator and Predator, other than that I haven't really followed his career... :)

His GUNS are eloquent. B-) 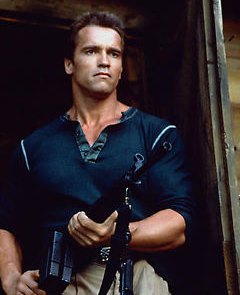