Should the Supreme Court have term limits?

That would be utterly ridiculous. Even the suggestion is laughable. The best thing about the Supreme Court is that they don't have term limits, so thus aren't worried about election/reelection like many politicians are, and thus they aren't ruled by that fear/desire to be reelected that our Congress and first-term Presidents are. I do agree that they've overstepped bounds and the Constitution is being stretched to fit the needs of those it was never intended for personal gain/profit, but to suggest we add a term limit to the Supreme Court? Are you insane? That would destroy the very fiber of our current legal system, threadbare as it is. If you think the Supreme Court is controlled by "big money" now, just wait until term limits are added.

The don't run for election now and they should never run for re-election.

After 17 years, they should be done. 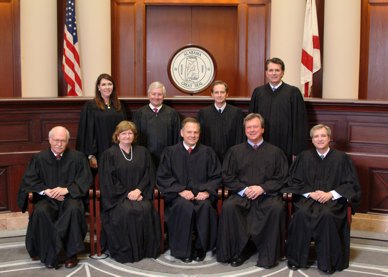 Do you support congressional term limits?

Should the U.S. Constitution be changed to allow foreign-born citizens to be President?

Barack Obama or Donald Trump - who is the better leader?
7
The Affordable Care Act as a means of providing affordable health care.
3
Do you support any political party?

Do you agree with Gov. Mike Huckabee that what Josh Duggar did was inexcusable but not unforgivable?
7
Was the U.S. involvement in Nigerian hostage situation (Chibok schoolgirls kidnapping) good or bad?

Carly Fiorina
7
Is it fair to compare Donald Trump to Adolf Hitler?
4
Would you like the Department of Defense to scale down to pre-WW II size?
5
H.R.3361 - USA FREEDOM Act

Democratic Party
5
What's your opinion on the price of hospitalization and medical treatment in the U.S.?

Do you think it was wrong to release Josh Duggar's sealed juvenile record?
12
Is restricting gun access a part of the solution to mass shooting incidents in the U.S.?

Franklin Delano Roosevelt
6
Do you like the "Pay it forward" (free college) idea?