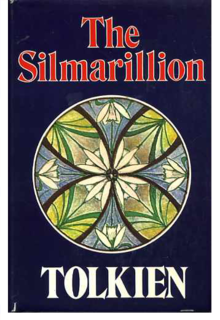 The Silmarillion is a collection of J. R. R. Tolkien's mythopoeic works, edited and published posthumously by his son, Christopher Tolkien, in 1977, with assistance from Guy Gavriel Kay, who later became a noted fantasy writer. The Silmarillion, along with J. R. R. Tolkien's other works, forms an extensive, though incomplete, narrative that describes the universe of Eä in which are found the lands of Valinor, Beleriand, Númenor, and Middle-earth within which The Hobbit and The Lord of the Rings take place.

The Silmarillion comprises five parts. The first part, Ainulindalë, tells of the creation of Eä, the "world that is". Valaquenta, the second part, gives a description of the Valar and Maiar, the supernatural powers in Eä. The next section, Quenta Silmarillion, which forms the bulk of the collection, chronicles the history of the events before and during the First Age, including the wars over the Silmarils that gave the book its title. The fourth part, Akallabêth, relates the history of the Downfall of Númenor and its people, which takes place in the Second Age. The final part, Of the Rings of Power and the Third Age, is a brief account of the circumstances which led to and were presented in The Lord of the Rings.