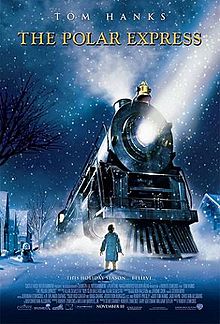 The film stars Daryl Sabara, Nona Gaye, Jimmy Bennett, and Eddie Deezen, with Tom Hanks in six distinct roles. The film also included a performance by Tinashe at age 9, who later gained exposure as a pop singer in 2010, as the CGI-model for the female protagonist. Castle Rock Entertainment produced the film in association with Shangri-La Entertainment, ImageMovers, Playtone and Golden Mean, for Warner Bros. Pictures. The visual effects and performance capture were done at Sony Pictures Imageworks. The film was made at a budget of $165 million, a record breaking sum for an animated feature at the time. The studio first released the film in both conventional and IMAX 3D theaters November 10, 2004.

The Polar Express is listed in the Guinness World Book of Records in 2006 as the first all-digital capture film. This is Castle Rock Entertainment's first animated film. This was Michael Jeter's last acting role, and the film was dedicated to his memory.

A Christmas Carol Jurassic World Goosebumps Titanic Guardians of the Galaxy The Nightmare Before Christmas Pixels Gravity The Martian Inside Out Toy Story 3 Alvin and the Chipmunks: The Road Chip Wall-E
Share this profile via OpiWiki smartlink: