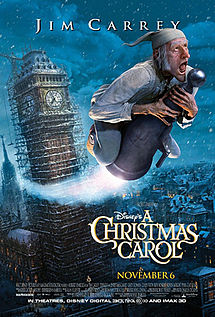 Disney's A Christmas Carol is a 2009 American 3D computer animated motion-capture holiday fantasy comedy-drama film written and directed by Robert Zemeckis. It is an adaptation of the Charles Dickens story of the same name and stars Jim Carrey in a multitude of roles, including Ebenezer Scrooge as a young, middle-aged, and old man, and the three ghosts who haunt Scrooge. The film also features supporting roles done by Gary Oldman, Colin Firth, Bob Hoskins, Robin Wright Penn, and Cary Elwes.

The film earned $325.3 million on a $175-200 million budget. The 3D film was produced through the process of motion capture, a technique Zemeckis previously used in his films The Polar Express (2004), and Beowulf (2007). A Christmas Carol began filming in February 2008, and was released on November 3, 2009 by Walt Disney Pictures. It received its world premiere in London, coinciding with the switching on of the annual Oxford Street and Regent Street Christmas lights, which in 2009 had a Dickens theme.

The film was released in Disney Digital 3-D and IMAX 3-D. It is also Disney's third film retelling of A Christmas Carol following 1983's Mickey's Christmas Carol and 1992's The Muppet Christmas Carol. The film also marks Carrey's first role in a Walt Disney Pictures film, and his second Christmas film after How the Grinch Stole Christmas (2000).