Zoolander 2 as a movie - discussion

Zoolander 2 (stylized as Zoolander No. 2, 2oolander and Zoolander II) is a 2016 American comedy film directed by Ben Stiller and written by John Hamburg, Justin Theroux, Stiller, and Nick Stoller. It is the sequel to the 2001 film Zoolander and stars Stiller, Owen Wilson, Will Ferrell, Penélope Cruz, and Kristen Wiig. Filming took place from April to July of 2015 in Rome, Italy. The film was released on February 12, 2016, by Paramount Pictures. More: en.wikipedia.org. 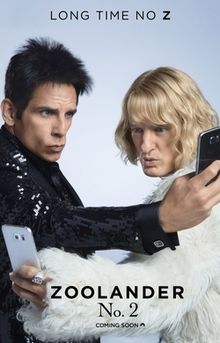