Mustang as a movie - discussion

Mustang is a 2015 internationally co-produced drama film directed by Turkish-born and French-raised film director Deniz Gamze Ergüven. The film is set in a remote Turkish village (Inebolu, Kastamonu) and depicts life of five young orphaned sisters and challenges they face growing up as girls in a conservative society. The event that triggers the family backlash against the five sisters at the beginning of the film is based on Ergüven's personal life.

It was screened in the Directors' Fortnight section at the 2015 Cannes Film Festival where it won the Europa Cinemas Label Award. Mustang is the first feature film directed by Deniz Gamze Ergüven. It won the 2015 Lux Prize. It was selected to be screened in the Special Presentations section of the 2015 Toronto International Film Festival. The film was nominated for the Best Foreign Language Film at the 88th Academy Awards. It was also nominated for a Golden Globe Award for Best Foreign Language Film. More: en.wikipedia.org. 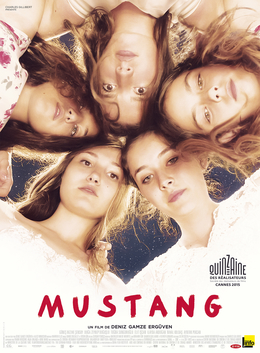