MDNA as a music album - discussion

MDNA is the twelfth studio album by American singer-songwriter Madonna. It was released on March 23, 2012, by Live Nation Entertainment and Interscope Records. It is also Madonna's first album not to be associated with Warner Bros. Records, the label she was signed to since 1982. As well as Madonna producing the album she worked with a variety of producers such as Alle Benassi, Benny Benassi, Demolition Crew, Free School, Michael Malih, Indiigo, William Orbit and Martin Solveig. MDNA lyrically explores themes such as partying, the drug MDMA, love for music, infatuation, heartbreak, revenge and separation.

"Give Me All Your Luvin'" was released as the album's lead single and became her record-extending 38th top-ten hit on the Billboard Hot 100. "Girl Gone Wild" and "Turn Up the Radio" were released internationally as its follow-up singles. All three singles have peaked at number one on Billboard Hot Dance Club Songs chart. "Masterpiece" was also released in the United Kingdom, while "Superstar" became a promotional single in Brazil. Prior to the album's release, Madonna performed at the Super Bowl XLVI halftime show on February 5, 2012. The album was further promoted by The MDNA Tour, which ended as the tenth highest-grossing tour of all time. More: en.wikipedia.org. 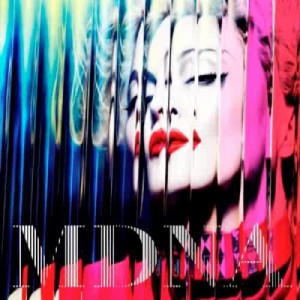