China Girl as a song - discussion

"China Girl" is a song co-written by David Bowie and Iggy Pop during their years in Berlin, first appearing on Pop's album The Idiot (1977). The song was rerecorded by Bowie and released on his album Let's Dance (1983) and as a single.

The UK single release of Bowie's remake reached No. 2 for one week on 14 June 1983, behind "Every Breath You Take" by The Police, while the US release reached No. 10. More: en.wikipedia.org. 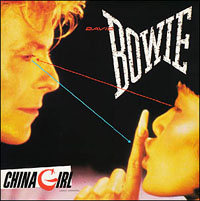