"Heroes" as a song - discussion

"'Heroes'" is a song written by David Bowie and Brian Eno in 1977. Produced by Bowie and Tony Visconti, it was released both as a single and as the title track of the album "Heroes". It has been cited as Bowie's second most covered song after "Rebel Rebel".

It was the lead track on Peter Gabriel's 2010 covers album, Scratch My Back. Among other notable covers, the Wallflowers recorded a version of the song for the soundtrack to the 1998 film Godzilla. This version peaked at number 10 on the Billboard Modern Rock Tracks chart in 1998, as well as number 27 on the Billboard Hot 100 Airplay chart, and number 23 on the Billboard Top 40 Mainstream charts. In the UK, the final sixteen acts from the seventh series of The X Factor released a cover version of the song on 21 November 2010 which topped the UK singles chart. More: en.wikipedia.org. 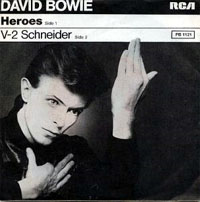